Blasting out of Sydney, Swivelhead mix a heady cocktail of melodic hooks in their rock tunes and guitar player/ singer / songwriter Melissa Perry lays it all on the line with lyrics about betrayal, love, obsession, denial all wrapped up in issues about friends, family and life. This frontwoman is not afraid to delve into the dark and Swivelhead’s songs are filled with edgy riffs and thumping grooves.

Swivelhead music can be described as sounding like Three Days Grace  mixed with the brooding of Linkin Park with the guitar styling of Jimi Hendrix.

Swivelhead are all about strong riffs. Melissa cut her teeth on guitar and vocal skills at festivals and talent quests throughout New South Wales and QLD, winning a swag of junior championships since the age of 8. She studied guitar at Southern Cross University in Lismore for three years with guitar legend, Jim Kelly (Cross Fire), dreaming of becoming a lead guitarist like Eric Clapton or Jimi Hendrix.

Clinton Harn brings his own swag of drumming experience to the band having played with Steve Edmonds, Charlton Hill, Candice Alley, Heval and The Noll Brothers, appearing at the ARIA awards and various TV programs such as Rove, The Footy Show and many more.

Swivelhead are now ready to rock their albums onto stages all over world.

Sell music on Amazon at ReverbNation.com 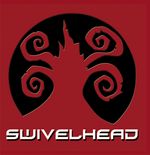